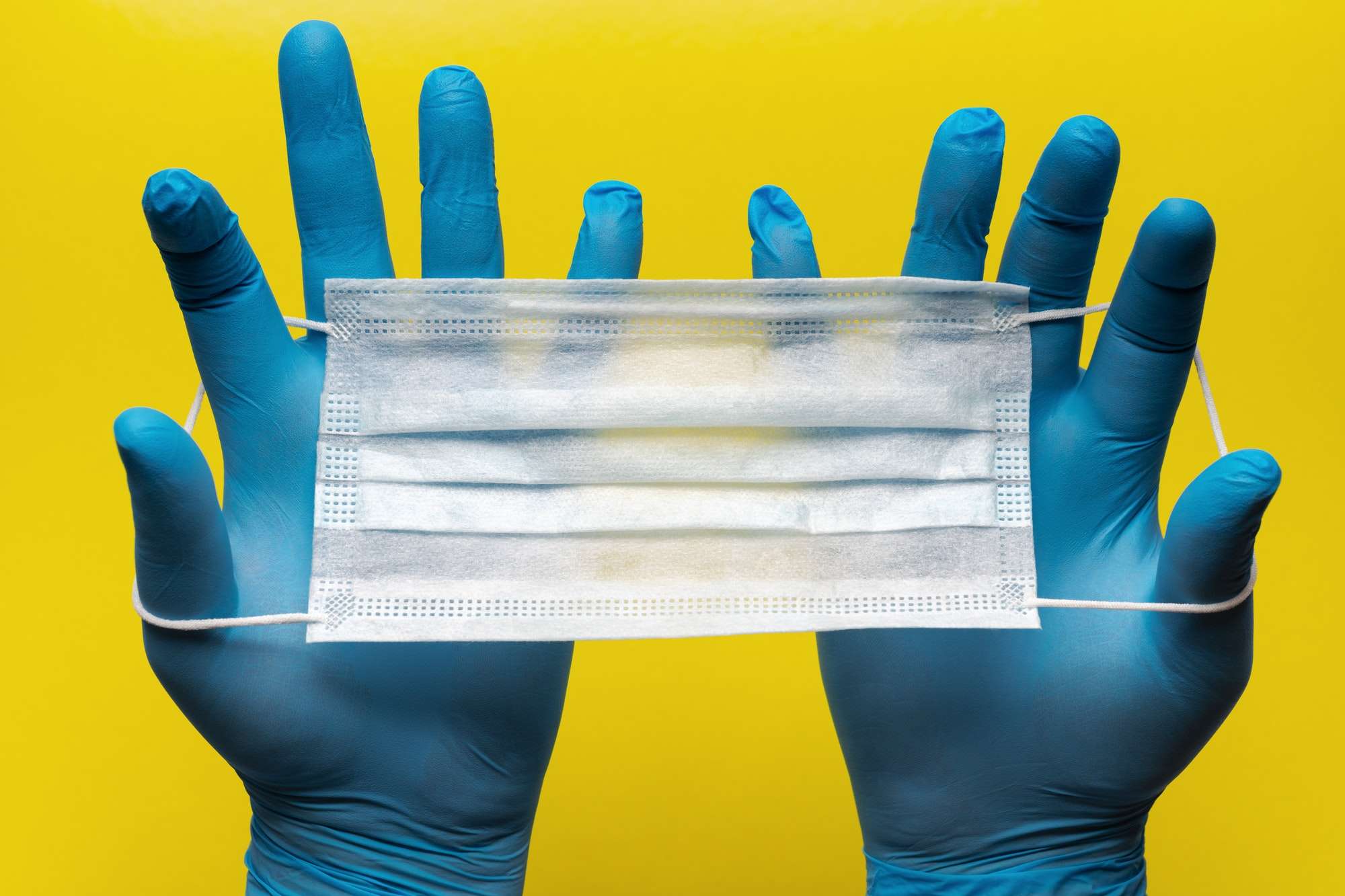 Planning a trip or end-of-year celebration? 7 Essential Covid Safety Guidelines Everybody Should follow to Avoid Coronavirus.

Zoono is a game-changer when it comes to disinfecting schools, nurseries, classrooms or other educational institutions. It creates a safe and clean learning environment for students. With Zoono, disinfecting become a monthly routine, instead of a daily difficulty. Zoono’s Fogging service, provides opportunity to keep the campus, school or nursery effectively hygienic with very little disruption. 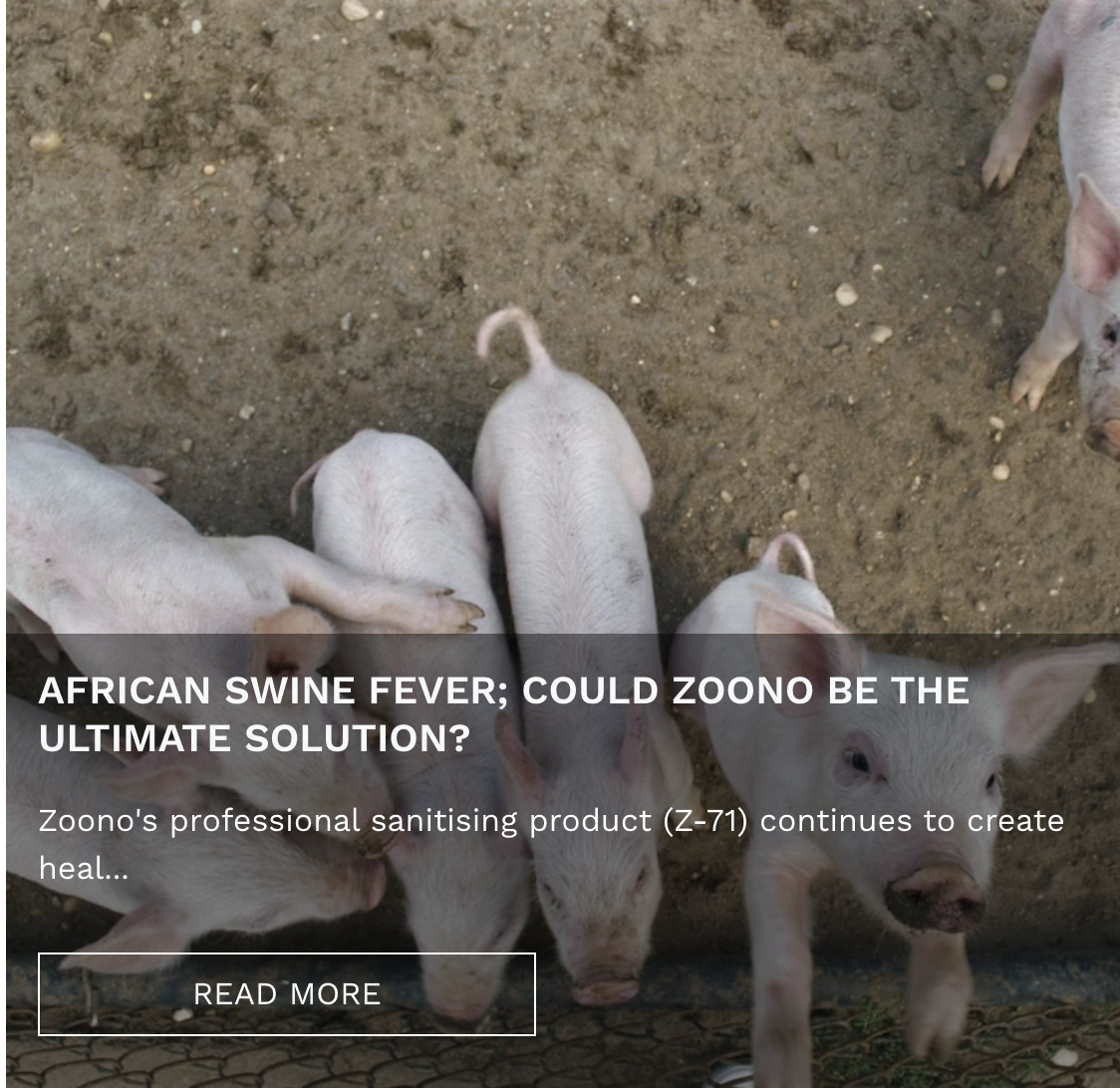 Small Caps share the exciting news to their audience:

Zoono’s advanced technology is available for household use. Order yours today 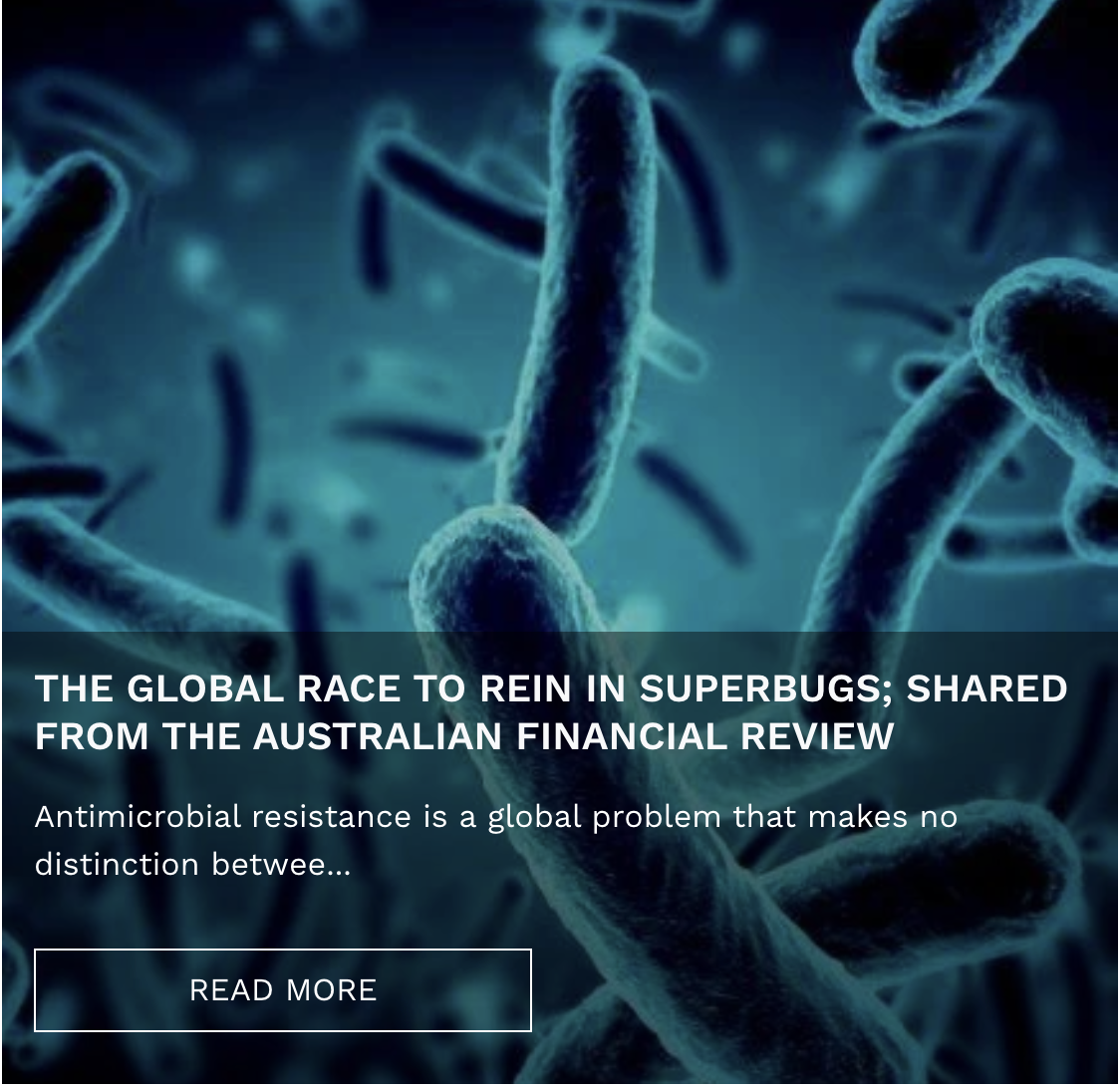 Antimicrobial resistance is a global problem that makes no distinction between “first world” and developing countries. Driven by the overuse and misuse of antibiotics, antimicrobial-resistant bacteria looms as an international public health disaster.

They are the cause of disease in hospitals, nursing homes and the wider community as sources of “super bacteria” proliferate. Drug-resistant microbes can be found in contaminated surfaces, water and food – even in seagulls.

A study led by Perth’s Murdoch University found Australian seagulls are infected with antimicrobial-resistant bacteria that cause serious infections in humans such as urinary tract infections and sepsis. Published in the Journal of Antimicrobial Chemotherapy, the study revealed that one in five seagulls tested were found to carry bacteria that were resistant to commonly used antimicrobial drugs.

A report from the Australian Commission on Safety and Quality in Health Care, Antimicrobial Use and Resistance in Australia (AURA) 2019, warns that despite the issuing of fewer prescriptions for antibiotics and antimicrobials, they continue to be overprescribed. As a result, some dangerous bacteria are growing increasingly resistant to common antibiotics and even last-resort treatments.

The AURA 2019 report found that overall use of antibiotics in the community fell between 2015 and 2017, the first decline in 20 years. But Dr Kathryn Daveson, clinical director of the AURA program, says that despite these gains, almost half the samples of enterococci tested in Australia were resistant to the antibiotic vancomycin – a level higher than in any European country.

“While the downward shift in prescribing will help to slow the spread of resistance, the levels of inappropriate prescribing of antibiotics in hospitals and the community are still too high,” Daveson says.

Dr Deborah Williamson, a clinical microbiologist at Melbourne’s Doherty Institute for Infection and Immunity, has called for urgent action to combat antimicrobial resistance (AMR). “If we don’t mount an appropriate response to AMR, we face a situation where common bacterial infections, like in the 1800s, may become untreatable,” she warns in a co-authored article for the Medical Journal of Australia.

While public health officials around the world grapple with reducing the over-prescription of antibiotics in the face of growing resistance, pharmaceutical giants are left to ponder the economic viability of investing in more powerful antibiotics.

The Geneva-based AMR Industry Alliance, a coalition of biotech, diagnostics, generics and research-based pharmaceutical companies, has called for more collaboration between governments and the private sector.

“Incentives are needed to overcome the challenge of high-risk investments that are difficult to sustain under the current conditions where new antibiotics will remain on the shelves as reserve and for use as a last resort, meaning there is very limited and unpredictable economic return on these products,” an alliance paper explains.

While investment in antimicrobial drugs is slowing, innovation is flourishing at the prevention end of the market.

Surfaces are a significant source of microbiological contamination, according to Hyslop, and are a major vehicle for harmful microorganisms.

“Bacteria, viruses, fungi and yeasts contaminate surfaces and can form biofilms that are extremely resilient to hygiene processes,” he says. “People are looking for smarter, non-toxic, safe, eco-friendly products that use fewer chemicals and won’t harm the environment.”

Hyslop says Zoono is “a next-generation biocide that contains no harmful chemicals and is less toxic than coffee”.

Zoono’s primary focus is the business-to-business market, which accounts for 70 per cent of sales. Its products are used in various settings including buildings, vehicles, shipping, aged-care homes and hospitals. The consumer business, which accounts for the remaining 30 per cent, is almost exclusively through online sales.

“Zoono is unlike other technologies in that it kills pathogens on surfaces and then protects those surfaces from recontamination for up to 30 days for hard surfaces, 24 hours for skin and up to 50 washes for textiles,” Hyslop adds. “Our product is colourless, odourless, non-leaching, environmentally safe and non-corrosive. It kills pathogens, including bacteria, viruses, algae, fungi and mould but is not a poison.”

Hyslop cheerfully admits that “we’re making bold claims” which is why he has commissioned independent laboratory reports from Germany, the US, the UK, Japan and China to test the products “against all bacteria and virus groups”. “When a potential customer says ‘prove it, we can,” he says.

Shared with permission from zoono.com from the Australian Financial Review 30 August 2019. 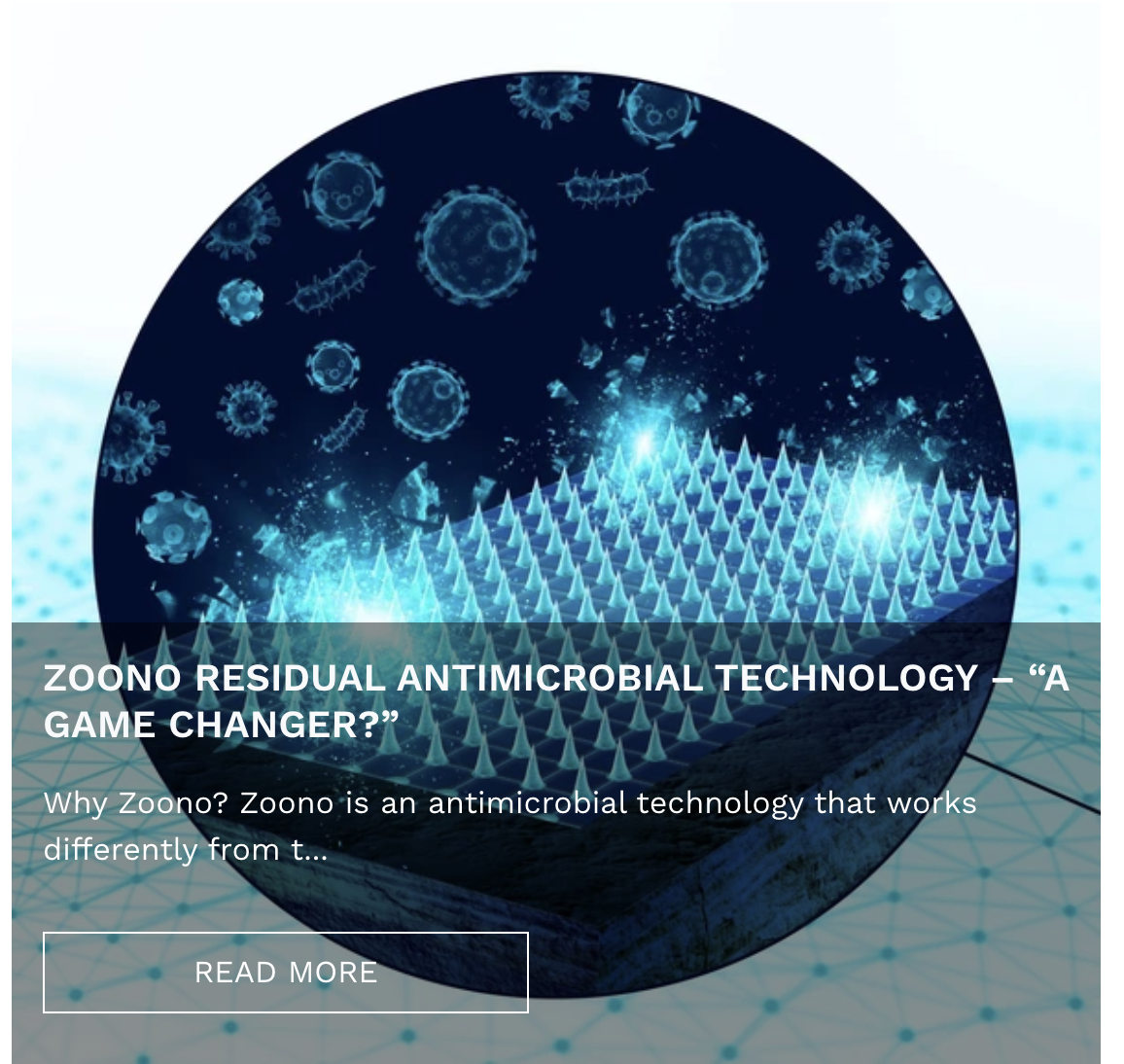 Zoono is an antimicrobial technology that works differently from the common liquid traditional disinfectants, that have been used for many years.  Antibiotics are now struggling for the treatment of infection due to resistance developed by potentially harmful microorganisms by selection as a result of the wide spread global misuse of antibiotics through poor prescribing, agriculture and availability without prescription.  Some bacteria are now totally resistant to the previously considered most effective antibiotics such as carbapenem’s.  These are destroyed by the bacteria producing enzymes capable of inactivating the antibiotic such as carbapenemase producing Enterobacteriaceae (CPE).

Zoono technology is not an antibiotic but it is a game changing solution to reducing the transmission of pathogenic microorganisms from the environment as the next generation of antimicrobial surface protection as it continues to kill microorganisms for up to 30 days depending upon the application.  Zoono works when it is dry, can be applied to any surface with the simplest application such as spray/wipe or more sophisticated fogging techniques, and once dry aesthetic cleaning can continue as it binds to the surface producing a protective antimicrobial barrier.  The technology is also available as a hand sanitizer to provide residual activity.

Why is protecting surfaces important?

It is now widely acknowledged that the environment and surfaces are a significant source of microbiological contamination and is considered as a major vector for harmful microorganisms to cause infection (cross-infection).  Bacteria, viruses fungi and yeasts contaminate surfaces and in fact, can form biofilms that are extremely resilient to hygiene processes i.e. cleaning and disinfection.  Harmful microorganisms can be transferred by cross-contamination via touch or the air in the form of aerosols (in water droplets) or generally as single cells or “clumps”.  Aerial contamination is especially significant for viral infection but also for other infections such as those caused by spores such as Clostridium difficile.  Bacteria can also be found in water systems such as Pseudomonas spp.  Each species, family of microorganisms can have its own unique mode of transmission and portal of entry, also people that are more vulnerable with low immunity, the very young and very old can be especially vulnerable but there are a plethora microorganisms “pathogens” that are capable of infection any person for example Staphylococcus aureus (MRSA), norovirus, Aspergillus niger and extremely pathogenic viruses such as Ebola. However, patients that are immune-suppressed, have open wounds or who are generally ill at any age are more susceptible.

The environment in any building, vehicle, ship the home etc. that has surfaces and is not protected especially the hospital environment, can therefore be a source of infection. Routine liquid disinfectants only work when the surface is wet, once the disinfectant is wiped off or dried it is no longer capable if killing any further potentially harmful microorganisms that recontaminate that surface, in fact the surface becomes contaminated to the same levels as before disinfection within 1 – 2 hours.  This is the reason why Zoono technology is the next generation biocide because it is also water based and non-toxic so does not require any special precautionary considerations such as the more toxic and corrosive biocides, which is why it can also be used in the home. The product designed for surface application is Zoono Microbe Shield (Z71).

Zoono works by the formation of a mono-molecular layer of covalently bound biocidal molecules based around silicone polymer chemistry.  The simplest analogy is that antimicrobial “spikes” are formed on the surface that are highly positively charged and as a result of this charge, the negatively charged molecular structure of microorganisms are attracted to the “spikes” and the cell wall and membrane is lysed by a process of “fluidisation”, the organism is then killed and the process continues.  Zoono however has no long-term sporicidal properties but there is a sporicidal version available if required for a one-off kill of spores such as those produced by the pathogen Clostridium difficile.

History past and present

Zoono technology was originally developed to help prevent the build-up of bio-matter on submarines reducing friction and for the antimicrobial protection of textiles.  However, at the time the formulations were highly volatile and toxic and had existed since the 1930’s and the technology was re-engineered to water based in the 80’s.  Zoono was established in 2008 by the founder Paul Hyslop based in New Zealand and since then has become a global organisation bringing on Zoono India, Zoono USA with FDA and EPA approval and a number of other countries globally such as China and the UEA.  As a result of this Zoono is used in many application areas and has a wealth of global microbiological test data.  In 2018 offices and ware housing in the UK was set up to serve the European market and currently extensive R&D is underway.

Zoono has also recently added an extensive range of household and personal products to improve hygiene around the home, which also will become re-contaminated in the same way as businesses and hospitals and can help defend against pathogens such as Norovirus and Flu viruses. Zoono can also be used to treat wooden surfaces, pools, and can also be used four mould remediation a problem found both in the home and in industry.

The important benefit of Zoono antimicrobial technology is that it is not a traditional biocide (disinfectant) as it modifies any surface to become antimicrobial for extended periods of time.  As it is classified as nano-technology it is completely invisible, so no residue can be seen on shiny surfaces even glass and as it is non-toxic and simple to apply has many application areas and is highly cost effective as only low volume application is required and it lasts for extended times after application and once dry.

Zoono has a full range of consumer and business products and continues through R&D and new product development to meet emerging and future global demand.